When Nick & Stu approached me originally about the Vector Team joining a kickball league, I had some reservations— Where would people get changed? How many people would play? What if someone got hurt? We decided to throw caution to the wind and sign up anyway.

As our resident comedian, I wanted to write a scouting report to get us pumped for the season (j/k, nobody thought I was funny or believed that I wrote it). Three games into the season and all of these scouting reports have proven to be spot on.

The season goes through June so stick with us to see where we go! (A few of our team members couldn't make it to picture day, but their photos are coming soon.)

Allyssa: Allyssa will be huge asset on both offense and defense, having both an unmatched athleticism and a strong attention to detail. Able to keep her cool in any situation (unless Stu is hanging crooked shelves), she’ll handle any stressful situation with ease. 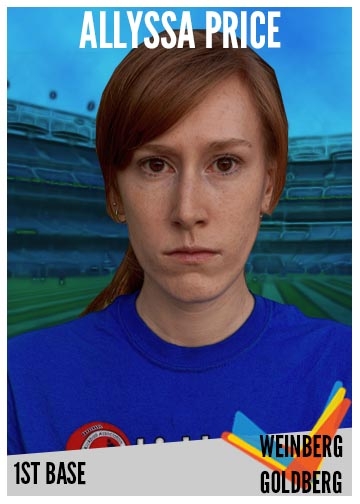 Andrew: Andrew is employee #1, so he has a lot to live up to in order to be Kickball Player #1. However, he’s well on his way and already training. Our scouts have been informed by the New York Presbyterian Hospital’s Kickball Research Department that the gains from standing all day really translate into kickball skills. This essentially means that Andrew practices 5 days a week, 51 weeks a year (with a week off for Christmas).

Ben: As an UWS local, Ben will give us a large advantage over our competition in deciding on post drink eat & drink locations. Refueling within a short window following exercise will help the team recover, so we will get stronger with each passing game. Additionally, Ben rides his bike everyday to work so you know he’s committed to his training program. 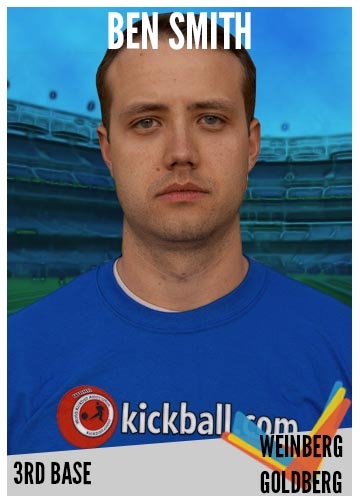 Chris: Chris’s strength lies in his videography skills. He will help us record and review all game tapes, so we will be able to adapt to our changing opponents. Waka has no rule against videotaping, so no need to worry about our own “Videogate” controversy.

David: David is one of our youngest players so expect a hunger from him that most of our seasoned players will not have. Though young, he can hold his own against older, more experienced players. Expect a real gritty player with a great kickball career ahead of him. 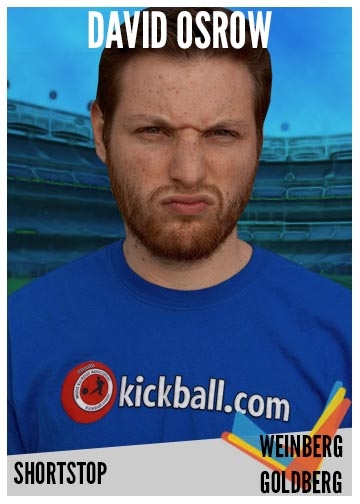 Faith: Injury be damned, Faith is still a force to be reckoned with. Her running speed will come in handy catching fly balls & running bases. Additionally, as an SEO expert, her search engine skills will come in handy for researching (and crushing) our competition. 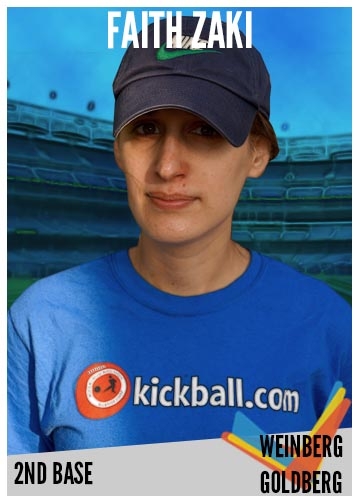 James: James is the wild card player. As this is his first year in the majors, we don’t have concrete evidence for James’s on field performance. However, our scouts feel his athleticism and endurance will be very useful in driving our team to victory. Our scouts also found that he loves to boost his performance with caffeine, giving him the energy needed to to excel at his position even late in the game.

Lauren: Lauren LOVES kickball & all things athletic and competitive so she will definitely be in her element here. Expect a lot of clutch plays on both offense & defense- this is one player who does it all!

Maggie: As Captain of her 4th & 5th grade kickball teams, Maggie is no stranger to fielding a kickball team. We'll see how well she has retained those skills over the last 18 years. 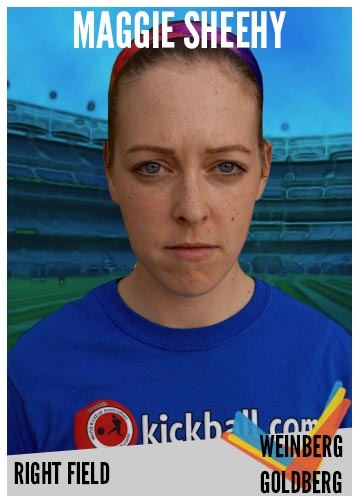 MB: Matt’s ability to take on many things at once is a huge asset for a team that needs an all around team player. Additionally, we can count on him to bring his A-game style wise. 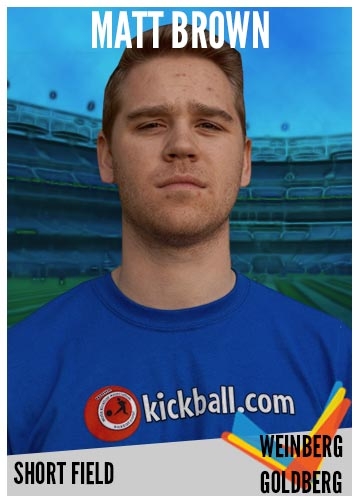 MW: As the only founder of the company who will be playing, Matt has a lot to prove. Known for his ability to multitask, Matt will have no problem playing sportsball while responding to texts from Jen on his Apple Watch™. Additionally, the morale boost provided by his Snapchats will be enough to consistently drive our team to victory. 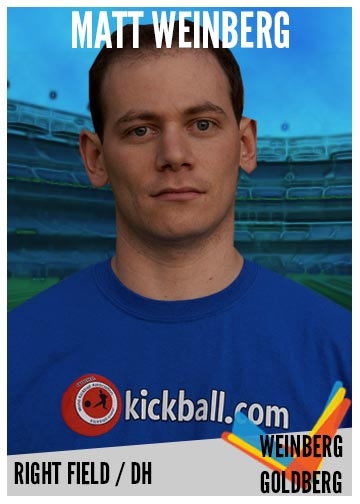 Nick: Nick will be one of our strongest players. He is quite used to performing well under terrible conditions (see http://isnickhungover.today) so he will be able to power through anything that is thrown at him. 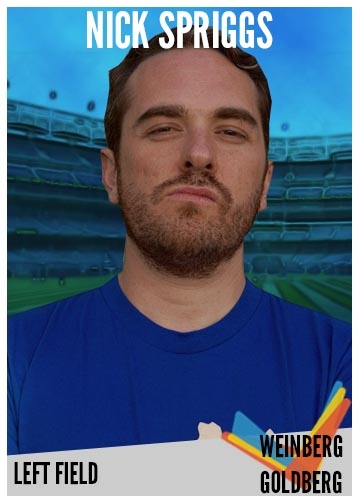 Rene: As the only Vector employee to master ordering Sophie’s, Rene is comfortable with difficult tasks that many others would shy away from. Expect Rene to go farther than any player would reasonably go for the team (or chicken, rice, & beans). 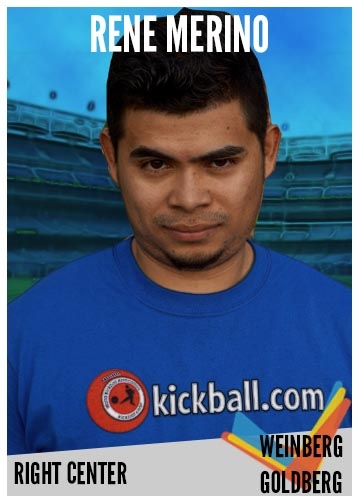 Rod: Known for his friendly & good natured personality, Rod’s greatest skill is in keeping morale high. He is an all around team player whose never-ending good mood is a huge advantage when spirits are low. 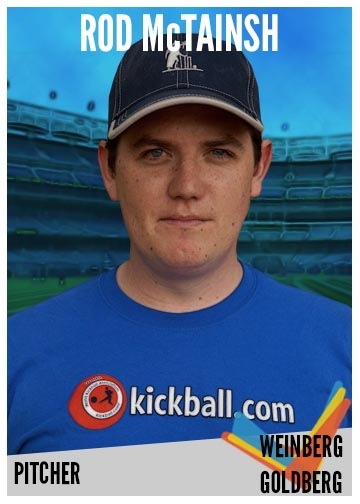 Sanitago: Santiago is a 3rd degree Tae Kwon Do master. His athleticism will be unmatched as he helps us destroy the competition. 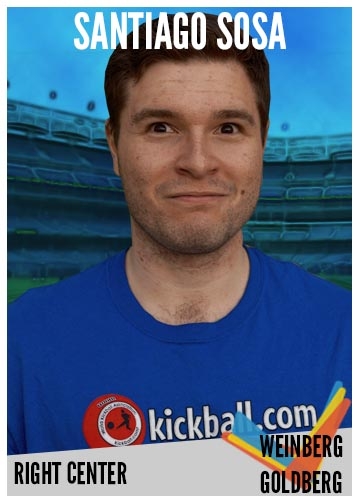 Shannell: Shannell is such a talented player that we recruited her from an outside agency to help us win. Though she is just a beginner at kickball, we believe she will be the best acquisition we get all season. Our lead scout Rod describes her as a "finance guru who loves food, fashion, and New York." How can you do anything but root for her?

Stuart: As our resident tequila enthusiast, Stu will be very useful helping our team hydrate— hydration is the #1 key to winning kickball after all. Additionally, as our top “manipulator” (his words, not mine), he will be instrumental in getting calls to go our way.

Photos by: xochitl and apardavila via Foter.com / CC BY with changes by Allyssa Price.